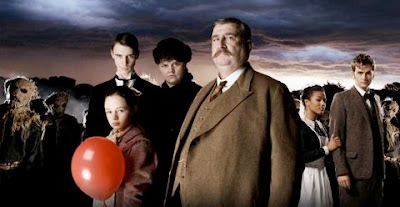 The members that were chasing the Doctor were made of a mother, father, son and daughter. While in Human form the Family could telepathically communicate together from a distance. They also had incredible sense of smell, tracking The Doctor where ever the TARDIS took him with his scent. They also had access to the Host's memory, though they had some difficulty pretending to be Humans.


The Family utilised a spacecraft, that held their 'essence' within it prior to them assuming human form. It had a variety of paddle like switches and other devices. The spacecraft could be rendered invisible.

The Family of Blood used energy weapons that fired a green energy that disintegrated humanoid tissue. They were somewhat difficult for humanoids to hold.

The Family also had scarecrow-like soldiers created by the son and placed into various fields. They were composed of straw, their molecules animated via a scientific process. Even after being shot down, they could still reanimate by the command of the Family.
Posted by Joanne Casey at 07:00

Email ThisBlogThis!Share to TwitterShare to FacebookShare to Pinterest
Labels: Family of Blood