The Doctor believed that the Shakri were a myth, a fiction to keep ‘the young of Gallifrey in their place’. But the Shakri exist: enigmatic, powerful and ruthless slaves to the Tally. Also known as: The pest controllers of the universe. Home Planet: Unknown Start to worry when: Brian Cox starts talking about perfect black boxes from space. Weaknesses: Shakri technology can be manipulated to act against them. First Appearance: The Power of Three 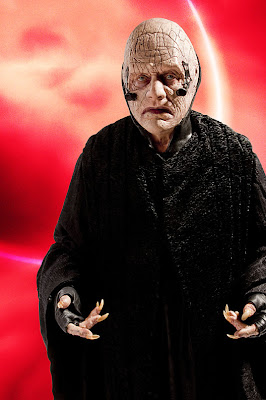 The Shakri are a force steeped in mystery. They serve the Tally, but even the Doctor didn’t know precisely was this was, reflecting that some called it ‘Judgement Day’ and others, ‘the Reckoning’. The Shakri implied it was an imperative which drove them to eliminate races that could be considered a contagion. Unfortunately, this was exactly how the Shakri viewed humanity, ignoring the species’ achievements and seeing the people of Earth as a plague to be expunged before it spread into space.

The Shakri attempted to destroy mankind through waves of cubes that were scattered across the globe. These box-life objects stopped people’s hearts but the Doctor was able to reverse their effect, restarting the affected organs using the cubes’ alien technology. He also halted the second wave of cubes and in doing so, defeated the Shakri’s plans.

For now. The precise whereabouts of the Shakri remains a mystery. The figure whom the Doctor confronted on their craft was enigmatic about his race. ‘The Shakri exist through all of time and none,’ he told the Doctor. ‘We travel alone and together… Serving the word of the Tally.’ And even he did not exist in any physical sense; the Doctor declared the vision was the ship’s automated interface, or to put it another way, ‘a talking propaganda poster’. bbc
Posted by Joanne Casey at 00:00

Email ThisBlogThis!Share to TwitterShare to FacebookShare to Pinterest
Labels: Shakri