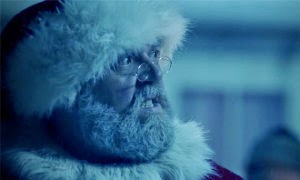 To allay any parental concerns Steven Moffat has said that the Santa Claus presented in the upcoming Christmas special will be ‘real’ and is definitely not evil.

Speaking at the Series 8 DVD launch, he said: “Santa could never be evil, for heaven’s sake! Santa is both real and a Christmas hero.”

“No no, don’t worry any parents who were worried about that. Santa is presented, as he is in real life, as a great Christmas hero.”

On Nick Frost’s casting in the role: “He actually is the real Santa. He’s been faking it up until now. For the first time he’s allowing the natural colour of his beard to show through.”

He added: “You could figure it out, you know, Nick Frost, Nicholas Frost – you see?”

doctorwhotv
Posted by Joanne Casey at 00:00