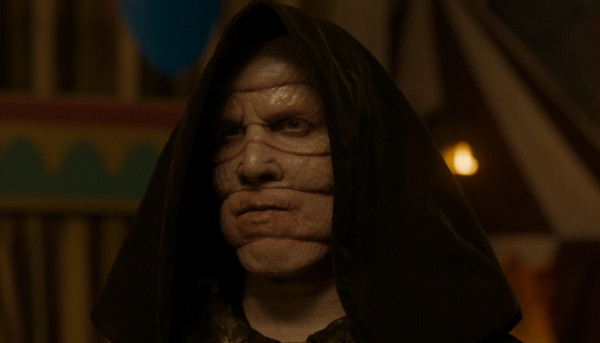 Colony Sarff was a servant loyal to Davros comprised of one large and many small snake-like creatures. By working in unison, the snakes were able to mimic a single humanoid individual. However, each snake could act independently and the colony made decisions as a democracy.

Sarff searched for the Twelfth Doctor, travelling to the Maldovarium, the Shadow Proclamation, and Karn. They encountered the Sisterhood of Karn, who could stop them from using their powers against them. Whilst unknowingly in the presence of the Doctor, they told Ohila, the Sisterhood's High Priestess, that Davros was searching for him. Colony Sarff Snake Sarff's true form Sarff returned to Davros, who told them that in order to find the Time Lord they must first find his friends.

They then followed Clara Oswald and Missy to Essex in 1138, where one of the snakes attacked Bors. They transferred the Doctor, Clara, and Missy (with their hands bound by more snakes) to their spaceship where they travelled to Skaro. They then accompanied the Doctor to see Davros, who asked them to leave. (TV: The Magician's Apprentice)

Sarff recaptured the Doctor after he escaped in Davros' chair, as their snakes were hidden inside it. Davros then had Sarff disguise themselves as cables in his life support system, as part of a plot to steal the Doctor's regeneration energy. Sarff grabbed the Doctor when he touched the cables and began draining his energy, but soon they were shot by Missy with a Dalek gunstick. Sarff perished after the machine was destroyed. (TV: The Witch's Familiar)