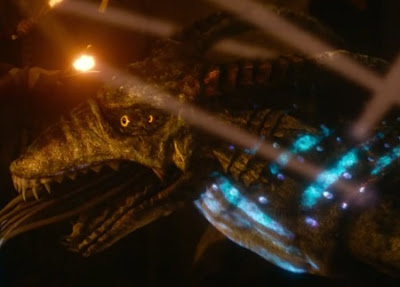 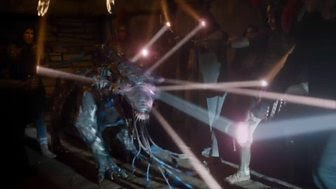 The Eaters of Light were extra-dimensional creatures described by the Twelfth Doctor as light-eating locusts, as they sought to enter dimensions with light on which they could feed. They lived in swarms of millions, and could potentially consume all the stars in the universe.
An Eater of Light resembled a large reptilian quadruped with a frilled neck and luminescent blue stripes. They fed on light and thus became weaker at night. They could also attack individuals directly by using long tentacles to pull them to their mouths; such victims were afflicted with the equivalent effect of being totally deprived of sunlight for decades, causing their bodies to degenerate. A glancing blow from the tentacles would leave a black slime that would render the victim unconscious, unless it were burnt off by exposure to sunlight. Eaters of Light were attracted to sound. They were incredibly resistant to physical damage, but could be harmed by exposure to light that had passed through a material with optical cancellation properties.
The Picts knew of an inter-dimensional temporal rift in Aberdeen that could allow the Eaters of Light to enter Earth, albeit only one at a time. They built a cairn around it and had a "Keeper of the Gate" periodically open the portal to prevent it from widening. Whilst the portal was open, a single warrior would enter and fight the creatures back. As time passed much more slowly in the creatures' dimension, a few minutes of battle there equated to six or seven decades of peace outside.

In the 2nd century, the Roman Ninth Legion invaded the area. The Gatekeeper at the time, Kar, allowed a single Eater of Light to pass through the portal; she thought it would destroy the legion, and become so weakened in the process that it would be easy to defeat. Instead, the creature became stronger after feeding on the Romans and began to darken the sky, threatening the world. The Twelfth Doctor, along with his companions Bill Potts and Nardole, worked with the Picts and the few surviving Romans to drive the Eater of Light back into the portal. Kar, along with several Picts and the Romans, then entered the portal to fight off the creatures.
tardis.wikia

Email ThisBlogThis!Share to TwitterShare to FacebookShare to Pinterest
Labels: Eater Of Light