The Bannermen were a criminal group led by Gavrok. They tried to exterminate the entire Chimeron species. 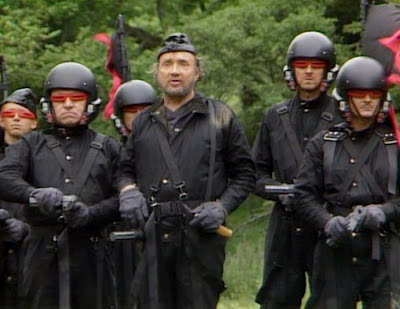 The Bannermen used zap guns as their principal weapon, firing in the general direction of targets as opposed to carefully aiming. They rarely took prisoners without due reason and would not release them willingly. They used booby traps to kill their foes and seemed unconcerned about such underhanded tactics. They displayed no appreciation for Galactic Law. (DW: Delta and the Bannermen) 1987.
Posted by Joanne Casey at 00:00

Email ThisBlogThis!Share to TwitterShare to FacebookShare to Pinterest
Labels: Bannermen