The Gaztaks were a race of near-human mercenaries. They used large spaceships. These were almost cuboid in shape. In conflict they employed energy weapons such as rifles and handguns. 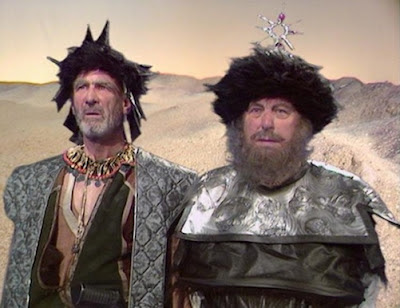 Tardis Wikia
In 1980, Meglos hired a band of Gaztaks led by General Grugger to abduct a human from Earth so he could take on its form. They took the human to Zolfa-Thura. Grugger and his aid, Brotadac, were hired to help Meglos steal the Dodecahedron from the Tigellans.
Posted by Joanne Casey at 00:00

Email ThisBlogThis!Share to TwitterShare to FacebookShare to Pinterest
Labels: Gaztaks