f you ever visit Mercy, as you near the town take a moment to scan the craggy hills and plains that surround it. That figure in the distance might just be a tourist, like you. Or maybe, just maybe, it’s the Gunslinger... Also known as: Kahler-Tek Home Planet: Unknown Random ‘Yes!’ Moment: Remaining on Earth to watch over Mercy. Fact! The word cyborg was first coined in 1960. First Appearance: A Town Called Mercy Most Recent Appearance: A Town Called Mercy Tasked with ending a long and bloody war, Kahler-Jex and a team of scientists created an army of deadly cyborgs. They took ‘volunteers’ and told them they’d been selected for special training. But in reality these unwitting victims were experimented upon, their bodies fused with weaponry. And finally, they were programmed to kill. 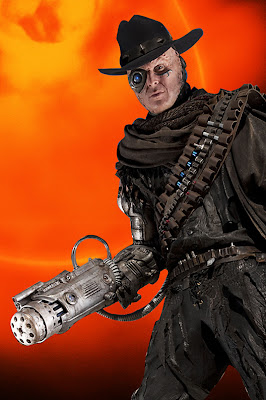 The cyborgs formed a devastating force that routed their enemy and ended the war in less than a week. “When he starts killing your people you can use your justice! The Gunslinger Following their victory, all the cyborgs were decommissioned… All, that is, but one. The circuitry of the cyborg created using Kahler-Tek was damaged in battle. He went off-line and like Frankenstein’s monster, began hunting down his makers. He tracked the last of them, Kahler-Jex, to Mercy but wanting to avoid unnecessary bloodshed, he would not enter the town and simply waited for his quarry. The Gunslinger unintentionally shot Isaac but after the death of Kahler-Jex, the Doctor persuaded him to remain on Earth and he became Mercy’s guardian angel. This creature of war eventually found a purpose in peace

Email ThisBlogThis!Share to TwitterShare to FacebookShare to Pinterest
Labels: Gunslinger