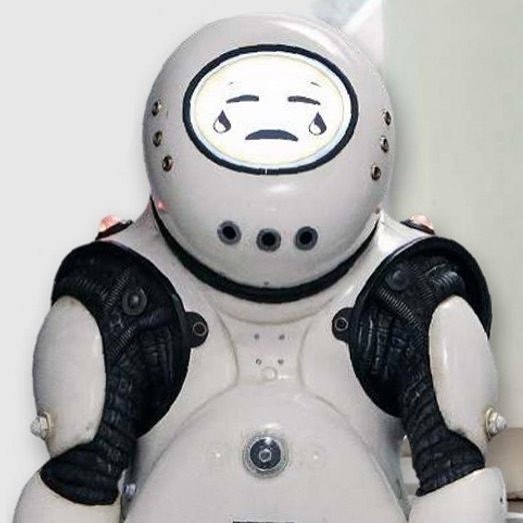 The Emojibots or emoticon robots were humanoid robots that served as an interface to the microbots known as the Vardy. As Bill remarked, they spoke Emoji — one form of language which lasted in human culture long into Bill's relative future.
The Emojibots as well as the Vardy were made to keep all of the colonists happy at all times. When a woman died of natural causes, her family and friends began to grieve. The Vardy read grief as an enemy of happiness and as a result killed anyone experiencing it. Eventually, all of the colonists who were awake at the time were killed, their skeletons used as fertiliser. 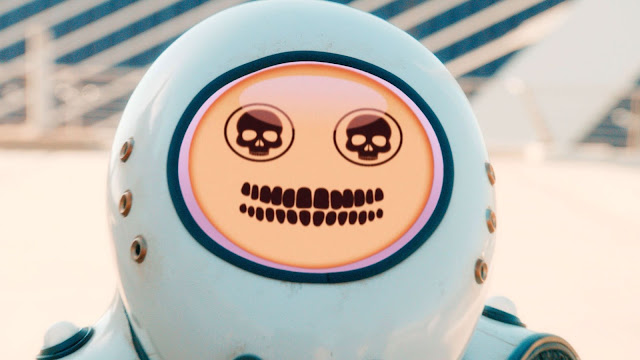 The Twelfth Doctor and Bill were handed mood badges so that it was able to keep track of what their emotional status was. It was able to read when Bill was hungry and fed her jelly. When they found out that the colonists were murdered, the Emojibots read that they were upset so began chasing them and surrounding them in order to kill them. The Doctor found out that by smiling and becoming happy the Emojibots would let you go.
When the remaining colonists woke up, the Doctor explained that the few colonists awake before were murdered, but before listening to him completely they took up arms in order to fight the Emojibots. Praiseworthy had stumbled across the robots but expressed grief for his mother, causing the Emojibots to grip him in order to murder him. Steadfast shot one of the two, causing an angry response to which it summoned Vardy to kill the colonists. The Doctor realised that the Emojibots were a lifeform, so wiped its memories of the events that had occurred. This meant that the Emojibots thought Gliese 581 D belonged to them. The Doctor started a negotiation between the humans and the Emojibots in order to try and allow the humans to live with them.
tardis.wikia
Posted by Joanne Casey at 22:32 No comments:

Email ThisBlogThis!Share to TwitterShare to FacebookShare to Pinterest
Labels: Emojibots

A puddle of sentient oil was left behind by a spaceship that had previously landed in Bristol. The oil was able to mimic other beings, survive a blast from a Dalek gun, target passengers and follow them across time and space.
Heather had previously come across the puddle around St Luke's University, noticing something strange about her reflection. She took Bill with her to show her the puddle, and Bill knew something was different but couldn't tell what.
Bill told the Twelfth Doctor about the puddle, and before she could finish explaining, the Doctor had already begun to run to the site. The Doctor quickly discovered what was off about the reflection, which was that it wasn't reversed horizontally like a mirror should be. The Doctor also noticed scorch marks in a circular pattern surrounding the puddle, but claimed he was bored to lead Bill away. As they left, the oil started creeping away from its spot. Bill later saw the oil in her bathroom, now taking the form of Heather.
Bill ran to St Luke's only to find the oil there again, repeating everything Bill was saying to her. Bill ran into the Doctor's office and shut the door behind her, locking it in place with a chair. The puddle managed to flow underneath the door and reappear as Heather again. The Doctor led Bill into the TARDIS and travelled to the vault. After realising that the oil was after them and not the vault, they ran back to the TARDIS and landed in Sydney, where the oil appeared as well.

Determined to find the limitations of the oil, the Doctor travelled 23 million years into the future onto another planet. The oil followed them through time and space to this planet as well. The Doctor and Bill went back into the TARDIS and landed in the middle of a Dalek-Movellan War to get a Dalek to exterminate the oil.

A Dalek shot the oil but it easily survived the attack, repeating the Dalek's "exterminate" phrase whilst doing so. The Doctor and Heather were trapped by a Dalek but it was revealed to be the oil having taken the form of a Dalek, although with Heather's star eye. It transformed again into Heather. The Doctor realised that the oil didn't want to kill, but wanted Bill to travel with it. Bill remembered that she asked Heather to promise that she wouldn't leave her, so this was the last thought Heather had before being eaten by the oil. Bill told the oil to let her go, the oil resumed its puddle form and remained at the war zone.
tardis.wikia
Posted by Joanne Casey at 22:26 No comments: