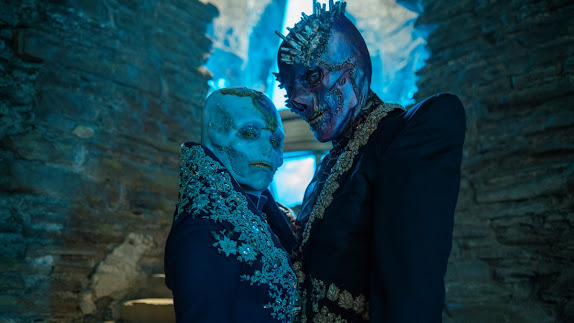 The Ravagers were a species that heralded from the Dark Times and worshipped the Eternal embodiment of Time. When the Division created the planet Time and the Temple of Atropos, they were able to control the flow of time through the Mouri, which led to the imprisonment of Time's embodiment as well. The Ravager siblings, Swarm and Azure, saw this as heresy, and sought to destroy Universe One as revenge against the Division,  who had imprisoned them for their part in the Siege of Atropos and the attempted freeing of Time.

The Ravagers were one among several species that the Doctor warned of in a distress call.

Humanoid and crystalline in appearance, the Ravagers possessed a wide variety of skin tones and patterns. Whilst Azure was a gaunt shade of white, with speckles and ripples of blue, yellow and green running over the crown of her head, this was in stark contrast to her brother, Swarm. Unlike his sister, his skin tone was a dull grey in his original body, and a dark purple, with flecks of gold, in his new body. Crystal formations could manifest very differently as well. Azure's formations were internal, running across the linings of her face and within a crack running down the crown of her head, whereas Swarm's formations protruded outwardly, at first covering the entirety of his skull, but then later only around his eyes and the left side of his forehead upon changing his form.

Indeed, Ravagers could harvest the life force of others to initiate a regeneration into a new incarnation. During this state, their skull became encased in a layer of spikes and their skin took on a faint orange glow. This was achieved by Swarm during his escape from his containment chamber, who gained the energy required from his murder of En Sentac.

As explained by Tecteun, the Ravagers were a form "temporal poison". They had the ability to to disintegrate all spatial objects through touch.Ravagers could also manipulate the Time Force and spatial energy,  teleport anywhere in spacetime within their universe,  and use telepathy, both casually and to form a psychic link with an individual.  These three abilities could even be combined in the building of a psycho-temporal bridge, which allowed the user and their companions to be transported to a target with whom the user shared a psychic link, even if thetardis.fandom target is outside of the user's own universe.

Posted by Joanne Casey at 15:57 No comments:

Email ThisBlogThis!Share to TwitterShare to FacebookShare to Pinterest
Labels: Ravagers (Swarm and Azure)

Every Doctor Who Episode That Title Drops Itself 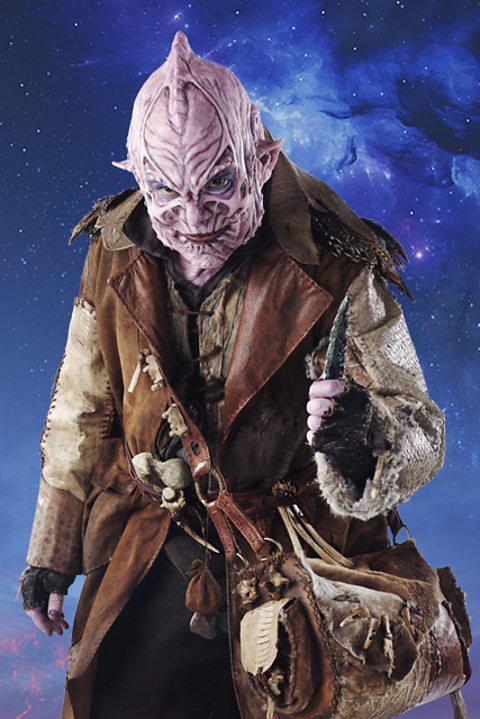 Posted by Joanne Casey at 09:26 No comments: 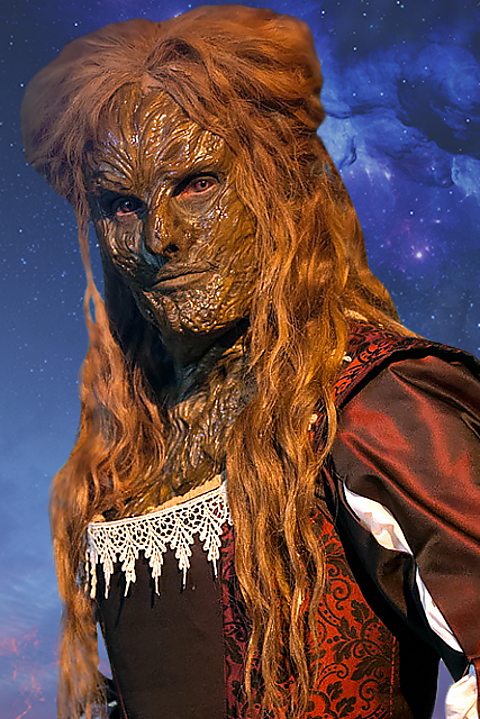 Posted by Joanne Casey at 09:23 No comments: 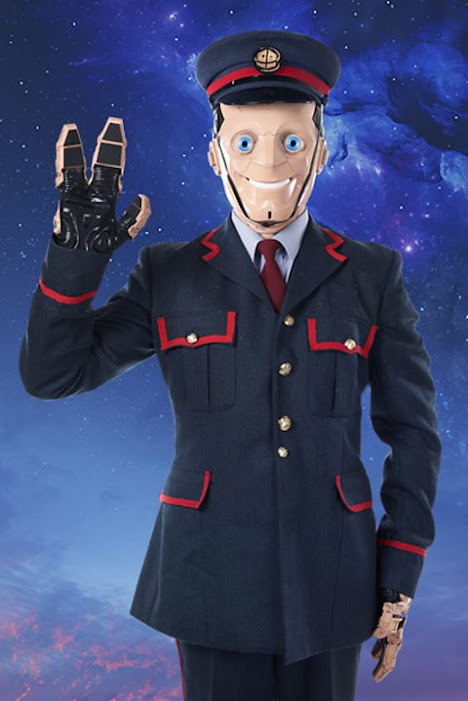 The Kerblam men were delivery robots in the future Home Planet: Kandoka

The Postmen worked for a company called Kerblam – the biggest retailer in the galaxy. It picked, packed and delivered anything you could want. The warehouse robots were called teammates, who were supposed to support the organic members of the team…but people were going missing. The

Postmen were getting ready to deliver death throughout the galaxy. But the Doctor had a solution and it was soon signed sealed and delivered.

Posted by Joanne Casey at 09:20 No comments:

Email ThisBlogThis!Share to TwitterShare to FacebookShare to Pinterest
Labels: Postmen 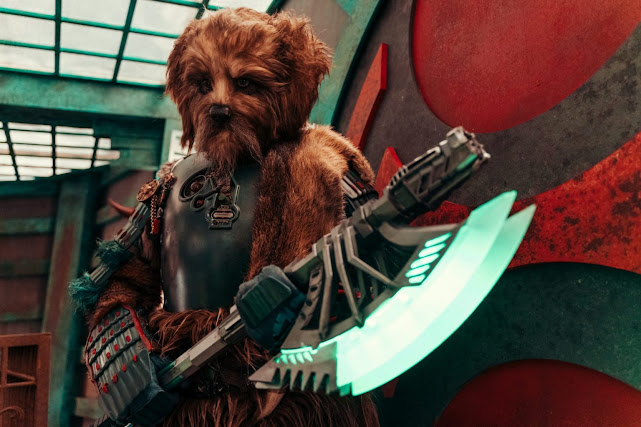 Posted by Joanne Casey at 08:51 No comments: 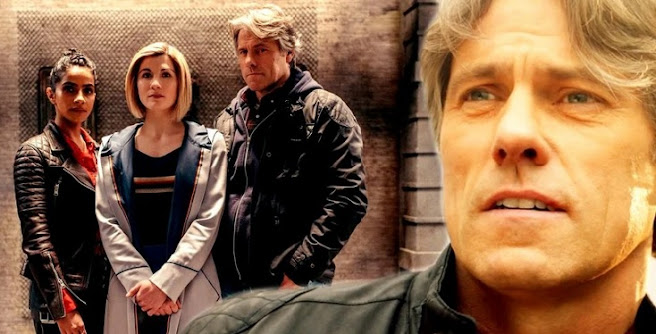 Posted by Joanne Casey at 08:33 No comments: 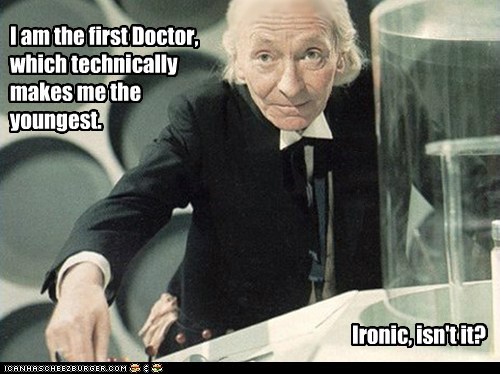 Posted by Joanne Casey at 09:53 No comments:

A glimpse of the Thirteenth Doctor on BBC One just now!#DoctorWho pic.twitter.com/MpkoxLGIhD

Posted by Joanne Casey at 10:20 No comments: 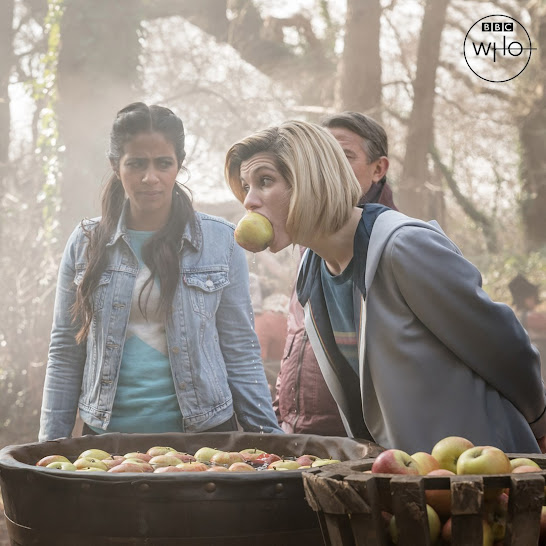 Posted by Joanne Casey at 16:47 No comments:

Email ThisBlogThis!Share to TwitterShare to FacebookShare to Pinterest
Labels: Halloween

Posted by Joanne Casey at 09:33 No comments:

Posted by Joanne Casey at 23:22 No comments:

5. Fugitive Of The Judoon

8. The Haunting Of Villa Diodati

9. Ascension Of The Cybermen

- Revolution Of The Daleks

Posted by Joanne Casey at 20:27 No comments: