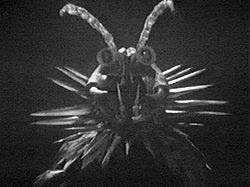 Two survivors of a space crash, Vicki and Bennett, are awaiting a rescue ship, due to arrive in three days time. They live in fear of Koquillion, a bipedal inhabitant of Dido which is stalking the area. 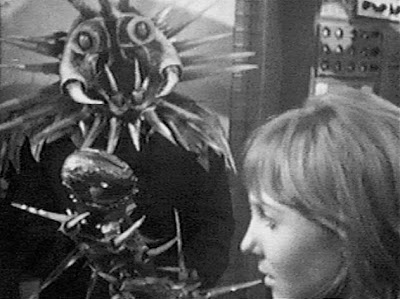 The Doctor enters Bennett's room, and finds things are not as they seem. The supposedly crippled Bennett is missing. He finds a trap door in the floor of the cabin and follows it to a temple carved from rock where he unmasks Koquillion as Bennett. Bennett reveals he killed a crewmember on board the ship and was arrested, but the ship crashed before the crime could be radioed to Earth. It was he who killed the crash survivors and the natives of Dido to cover his crime. He has been using the Koquillion alias so that Vicki would back up his story.
Posted by Joanne Casey at 07:00

Email ThisBlogThis!Share to TwitterShare to FacebookShare to Pinterest
Labels: Koquillion