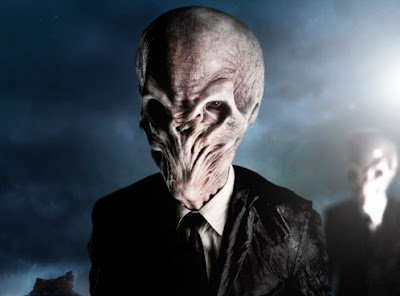 The Silence are a terrifying race who invaded Earth at an undetermined point in our history. They have powers of telepathy and can kill using a deadly discharge from their hands. But every Silent has a far eerier ability...

Even if you see a Silent, you won't know you've spotted it as Silence somehow edit themselves from an observer's memory. Glimpse one of these creatures and you may feel slightly unsettled the moment it's out of view, but you won't remember anything about it. If and when you next see a Silent you may have a flashback to your first encounter, but again, when the Silent is out of view your mind will not recall ever seeing the alien.

Amy spotted a solitary Silent in modern day America and in 1969 River Song and Rory stumbled across a nest of Silence in a series of tunnels beneath the US. They are horrifyingly powerful killers... can the Doctor stop them? via
Posted by Joanne Casey at 07:00

Email ThisBlogThis!Share to TwitterShare to FacebookShare to Pinterest
Labels: Silence