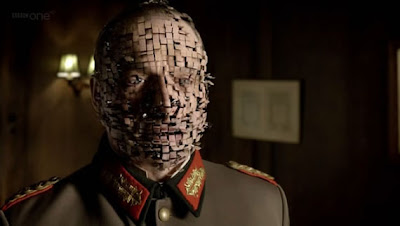 The Teselecta, first shown in "Let's Kill Hitler", is a robot-like machine with the ability to change its appearance. It is commanded by humans, however smaller robots patrol its interior and incinerate intruders. The Teselecta are sent through time by an organization called "The Justice Department" with the intent to remove people from their established time stream to enforce punishment on them, though it does this only shortly before their end. This is regarded as a responsibility that comes with the capability of time travel. The Teselecta is not bigger on the inside, instead its crew is actually shrunk by means of a miniaturization ray and a compression field. They have access to numerous files on important people. In "Let's Kill Hitler", Amy and Rory are trapped within a Teselecta and chased by its robotic "immune system". Wrist-bands worn by the crew stop the robots attacking them, and anybody not wearing this band is incinerated. Later in the episode the crew of the Teselecta are evacuated by what appears to be a trans-mat-beam. via
Posted by Joanne Casey at 19:21

Email ThisBlogThis!Share to TwitterShare to FacebookShare to Pinterest
Labels: Teselecta