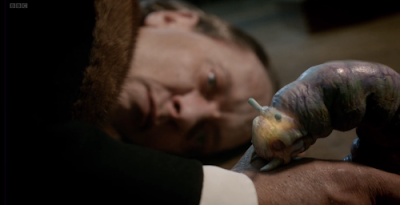 A memory worm was in the possession of the Eleventh Doctor in 1892 London. He intended to use it to wipe Clara Oswin Oswald's memory of meeting him. However, his cohort Strax neglected to wear protective gauntlets while handling the worm, losing both his memory and the worm twice. Afterwards, Clara convinced the Doctor not to use the worm on her, as she needed to retain the memory of how to avoid conjuring the alien snowmen. The memory worm was later recovered and used by the Doctor as part of a trap; the Doctor hid the worm inside a modern lunchbox, and gave it to Walter Simeon. The worm bit Simeon, causing him to lose the memories of his entire adult life.
Posted by Joanne Casey at 00:00