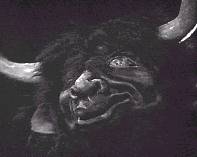 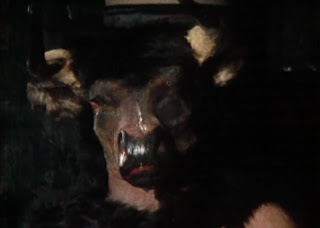 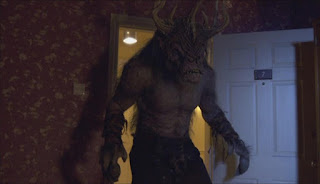 The Minotaur was a creature from Greek mythology. It was said to have the head of a bull and the body of a man. The Second Doctor and Zoe Heriot encountered the Minotaur in the Land of Fiction. It vanished when they denied its existence. (TV: The Mind Robber) The Third Doctor learned that the Minotaur was real during a trip to Atlantis. The creature was formerly a member of Dalios's court, a great athlete who desired the strength of a bull and a long life in which to use it. Kronos granted him his wish, and the creature was made guardian of the Crystal of Kronos until the Doctor defeated it. (TV: The Time Monster) The Greek hero Theseus was renowned for fighting the Minotaur. The Fourth Doctor claimed to have given Theseus the ball of string that he used to find his way around the labyrinth in which the Minotaur resided. (TV: The Creature from the Pit) It is unknown if this is the same Minotaur from Atlantis or a different one. Extraterrestrial life forms which resembled the Minotaur included the Nimons, a related species called the Minotaurs who were the Nimons' "distant cousins", the Tauride and Taureau's race. (TV: The Horns of Nimon, The God Complex via
Posted by Joanne Casey at 00:00

Email ThisBlogThis!Share to TwitterShare to FacebookShare to Pinterest
Labels: Minotaur