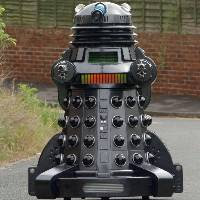 Meet Dalek Storm.
Hate-filled and hell bent on universal conquest and domination he may be. But Storm has to do his evil plotting from the quiet conservatory of a house in Stanley, Wakefield.However, at 6ft tall, 5ft long and 4ft wide, he's enough to terrify any Doctor.
Storm – short for Special Tactical Operations Radioactive Mutant – dwarfs all the armoured alien killing machines ever to appear on the BBC's Doctor Who.
Alan Clark, 48, has spent eight months, working five hours a day, building his menacing mate. He set himself the task after he was disappointed with the dimensions of the new Supreme Dalek which featured in the 2008 series.
Video
Posted by Gary at 21:35