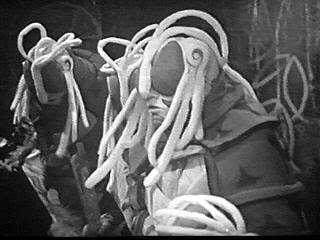 The Optera resembled humanoid woodlice, with a heavy carapace and six arms. They moved by hopping. They had large eyes, sensitive to the light and ring of tendrils around their head.

The Optera were a primitive culture, with no advanced technology. They feared the Animus, who they called Pwodarauk, as well as anything from the surface world and light. They worshipped the Monoptera as gods and painted their images on the walls.

Much of their language was metaphorical or poetic in basis. For example, the walls were "silent walls", to dig was to "open mouths" and acid was the "water that killed"

When the Animus came to Vortis, most of the Menoptera left the planet, but some stayed behind. They moved underground, eventually losing their wings and gaining the characteristics necessary for subterranean life.

Many years after this, Ian and Vrestin were being chased by the Zarbi when they fell into a cave. They were captured by the Optera, who planned to kill them, but when they realized that Vrestin was a Monoptera, they agreed to help them. Hetra, leader of the Optera, led them to the centre of the Carsinome, though Nemini gave her life to block an acid flow. When the Animus were defeated, the Optera joined the Menoptera on the surface, hoping to regain their wings.
Posted by Joanne Casey at 07:00

Email ThisBlogThis!Share to TwitterShare to FacebookShare to Pinterest
Labels: Optera