Malpha was one of the representatives on the Galactic Council that planned to conquer the Solar System with the aid of the Daleks. He was last to arrive at their first conference, but took a leading role in that meeting. He had a lesser presence in subsequent meetings. He was one of the few to survive the Daleks' treachery, and the Doctor helped him to esape back to his own people and warn them about the Daleks' invasion plans and organise resistance.

Malpha was tall and well built and had a face covered with a network of dark veins on pale skin, resembling a patchwork. 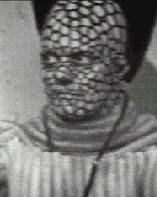 Email ThisBlogThis!Share to TwitterShare to FacebookShare to Pinterest
Labels: Malpha