From early in the Cyberman's history before they froze themselves on Telos, some variants had crystalline eyes and antennae through which they receive commands. These Cybermats tended to resemble oversized metallic silver fish and have segmented bodies with cilia-like tactile sensor probes along the base of their heads. Some, though not all, small Cybermats of this kind could easily fit in the palm of a humanoid hand. 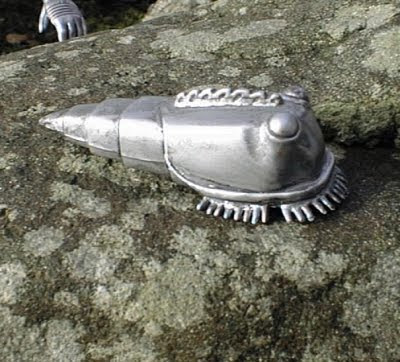 In the 21st century when the Cybermen attempted to infiltrate Space Station W3 they had photoreceptors for eyes rather than crystalline based eyes. Otherwise they looked similar.

When the Cybermen infiltrated Nerva Beacon in a plot to destroy Voga the Cybermats had segmented, eyeless, flat worm-like bodies without cilia. 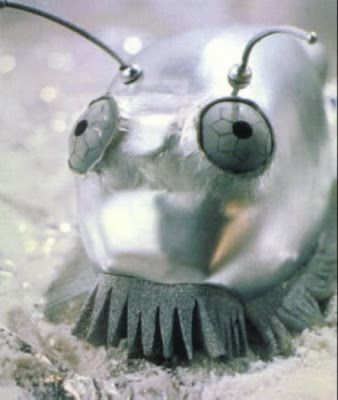 Cybermen from the 30th century who traveled back to 1940 also employed Cybermats and harvested Humans to make more of them.

Cybermats shared the Cyberman's weakness for gold. They could also be disabled with electric charges.
Posted by Joanne Casey at 07:00

Email ThisBlogThis!Share to TwitterShare to FacebookShare to Pinterest
Labels: Cybermats