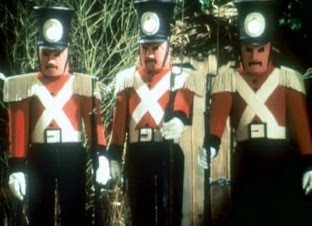 The Clockwork Soldiers were giant, clockwork robots that appeared as toy soldiers and were used as patrols in the Land of Fiction. The Soldiers were slow and clanky, but deadly and menacing. The light on top of their hats was used as a camera for the Master of the Land to see from his base, but may not be how the Soldiers themselves saw. They lumbered around with rifles that end with sharp bayonets. Land of Fiction characters could not see them. (1968).