Doctor Who's Car - Bring Back Bessie!

Bessie was a canary-yellow roadster, acquired by the Brigadier for the Doctor's use as part of the exiled Time Lord's agreement to assist UNIT in its efforts to protect Earth. The Doctor had requested a car of this nature after using a similar vehicle in his first fight against the Autons and liking its style and character. (DW: Spearhead from Space)

The Doctor made several modifications to Bessie during his time at UNIT. These included an anti-theft force field (DW: The Ambassadors of Death), which magnetically trapped anyone attempting to steal Bessie; a remote control (DW: The Dæmons), with which the Doctor could steer the car from a distance; and a minimum inertia hyperdrive which allowed him to drive at breakneck speed and still come to a sudden stop without him or his passengers being sent through the windscreen by inertia, which the brakes absorbed. This was used when the Brigadier said he would rather travel in his "more reliable" Land Rover so the doctor decided to overtake him. (DW: The Time Monster) 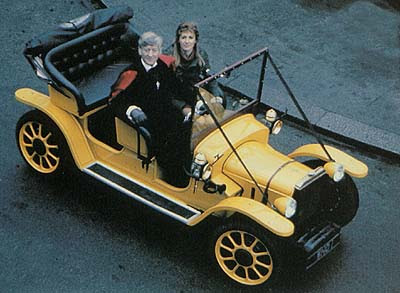 When he had begun his exile on Earth, the Doctor (who had just regenerated and not fully recovered) stole an antique roadster parked in front of Ashbridge Cottage Hospital so that he could get around. He liked it, and, while seeing to it that the car returned to its rightful owner, the Brigadier said he thought he could get something like it. (DW: Spearhead from Space)

Bessie proved instrumental in capturing the Master. When he attempted to steal the Doctor's car and make good his escape following the events at Devil's End, the Doctor used his remote control to steer the Master back to the waiting UNIT soldiers, who took him into custody. (DW: The Dæmons) Bessie was briefly pulled into Omega's universe during his attempt to capture the Doctor. (DW: The Three Doctors)

Shortly after his companion Jo Grant left him the third incarnation of the Doctor had temporarily left Earth, his fifth incarnation arrived on Earth and borrowed Bessie while helping UNIT defeat the Xaranthi (PDA: Deep Blue)

The car was also abducted along with the Doctor into the Death Zone, where it was heavily damaged by one of the thunderbolts that periodically rained down upon the place. (DW: The Five Doctors)

Presumably it was Rassilon who returned the car to Earth at the conclusion of this adventure.

With his waning lack of interest in affairs in UNIT and Earth, the newly-regenerated Doctor only drove Bessie during his first adventure (DW: Robot). At some point after this, Brigadier Lethbridge-Stewart had it "put into mothballs".

It was brought out briefly in the 1990s as the Brigadier and UNIT worked together with the Doctor's seventh incarnation to battle Morgaine. (DW: Battlefield). 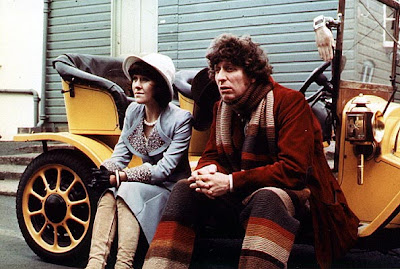 * Bessie was most likely named in honor of William Hartnell's Aunt Bessie, who passed away during the filming of the First Doctor serial The Myth Makers.
* The actual registration "WHO 1" was already in use by another motorist, so the car was actually registered under a different plate number.
* Phil Collinson said he paid 50p for a ride on Bessie round a shopping centre when he was a child. 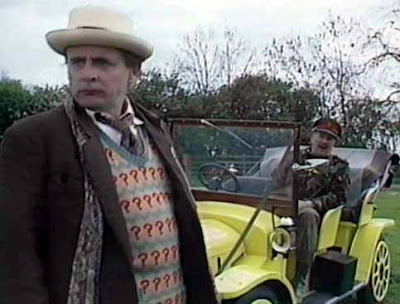 Email ThisBlogThis!Share to TwitterShare to FacebookShare to Pinterest
Labels: Bessie