Master Of The Land 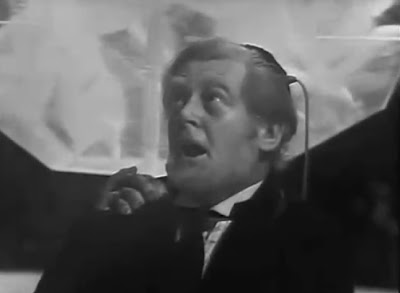 The Master was originally employed in writing the adventures of Captain Jack Harkaway for a boy's magazine called The Ensign. He wrote 5,000 words each week for 25 years. In 1926 when he must have fallen asleep writing, the Master Brain found him and connected him to the Land of Fiction where he became ruler. (Presumably, the Master Brain wanted to harness the writer's powers of imagination. As the Master would note later, the computer needed imaginative minds.) The Master Brain enslaved the Master and intended to add the Doctor to the system so that it could invade Earth and all Humans would be adjusted to the Land, leaving Earth bare to be taken over. As Master, he could control the Clockwork Soldiers and manifest any fictional character he liked. He had the power to turn people from the real universe into beings of fiction, though not directly: he had to trick them into it. from The Mind Robber, 1968.
Posted by Joanne Casey at 07:00

Email ThisBlogThis!Share to TwitterShare to FacebookShare to Pinterest
Labels: Master Of The Land