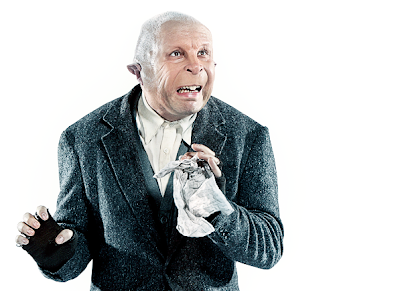 Gibbis is a native of Tivoli, a grey planet whose residents take a strange delight in subjugation. Although they fear death they welcome invasion and Gibbis' old school motto - Resistance is exhausting - succinctly reflects this mindset.

He is a coward and it would be easy to feel pity for this mole-like creature, but beware! The Doctor sussed out Gibbis early on. 'Your civilisation is one of the oldest in the galaxy. Now I see why,' the Time Lord told him, adding that his, 'Cowardice isn't quaint. It's sly... aggressive.' Certainly, Gibbis was prepared to sacrifice Howie in the name of self-protection and showed a dreadful delight in unnerving Amy when he suggested she might have not yet have faced 'her room'.

Before he was plucked from Tivoli and locked into the Minotaur's prison, Gibbis worked in town planning. He was engaged in a project to line all his planet's highways with trees so that invading armies could march in the shade! via

Email ThisBlogThis!Share to TwitterShare to FacebookShare to Pinterest
Labels: Gibbis