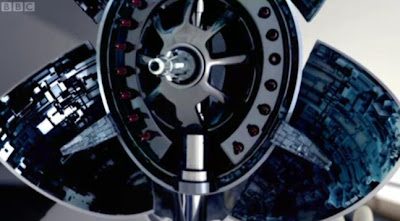 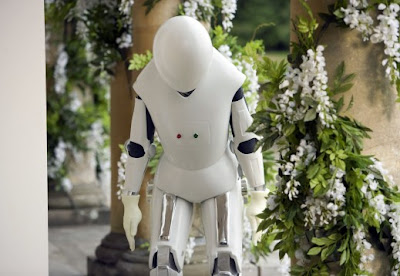 Handbots were alien robots designed to aid people with the plague.
They administered medicine, which was deadly to anyone non-Apalapucians. The Handbots had no face but a blank head. They used their hands as sensors in order to see their enviroment. If their hand touched a person, they would fall into an instant sleep. In times of defence, their heads came apart to reveal a gun which fired an anaesthetic needle. When someone spoke to them, they choose whether the statement would be accepted or rejected, with the green and red buttons on their chest showing the result. The chest would, then, drop down to reveal a syringe that is used to administer the medicine. From The Girl Who Waited, 2011. via
Posted by Joanne Casey at 01:40

Email ThisBlogThis!Share to TwitterShare to FacebookShare to Pinterest
Labels: Handbots