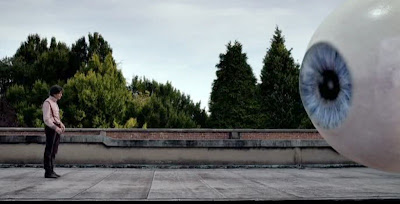 The Atraxi are a group of Galactic Policemen. They made their first appearance in The Eleventh Hour. The Atraxi resemble giant eyeballs who are connected onto the bottom of their crystal/shard-like spaceships . This eyeball is also used as a type of searchlight. In the Eleventh Hour, the Atraxi threatened to incinerate Earth unless they find Prisoner Zero. 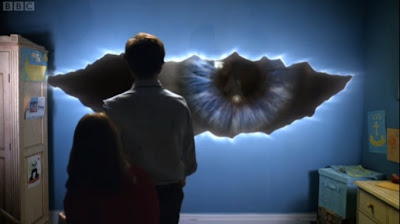 They sealed Earth in a force field so they could "boil" the planet in 20 minutes. The Doctor created a computer virus/message and got Jeff and team of geniuses to send the message worldwide on everything to give the Atraxi a hint where Prisoner Zero was, that they can trace which led to the phone the Doctor had. Once the Doctor got Prisoner Zero into its normal form, the Atraxi constrained it and it disappeared (possibly killed or imprisoned). 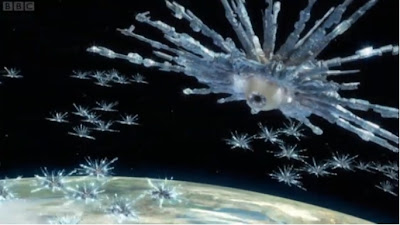 The Atraxi left but where brought back by the Doctor due to Article 57 of the Shadow Proclamation and why they were going to burn Earth. After the Doctor asked them if Earth is a threat to them, if the people were guilty of any crime of the Atraxi law and is the planet protected (showing various aliens and enemies from the Doctor's life) and what happened to them, the Atraxi left Earth.
Posted by Joanne Casey at 07:00

Email ThisBlogThis!Share to TwitterShare to FacebookShare to Pinterest
Labels: Atraxi