The Star Whales once flew around space in harmony, until one day towards the end on the third millennia, there was only one left, this Space Whale went to Earth and saw that it was in great need. The people of the United Kingdom, built on top of it covering it up and it became known as Starship UK. 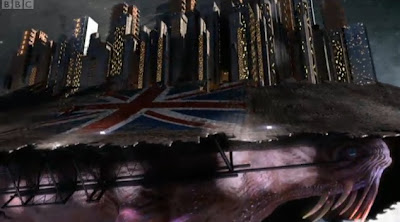 An ancient and benevolent species the Star whales had according to legend guided early space travellers through dangers on their journeys through space. By the time of the 29 century the species was all but extinct save for who is theorised to be the last of its kind. When earth was facing destruction because of Solar flares that Star whale was drawn to earth. All the peoples of Earth had managed to escape in massive city ships but the people of Great Britain lacked the supplies to create an engine, the people were left hopeless and mostly heartbroken by the sounds of their Children crying due to the increasing temperatures. It was these sounds that had drawn the whale to the planet for has Amy put it "When you're that old and alone an so full of kindness what else can you do" who intended to offer its services to the stranded people. 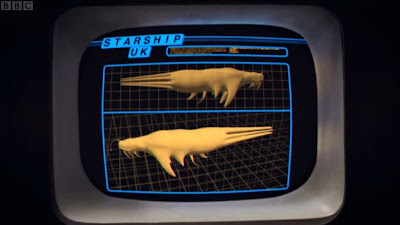 Unfortunately the people of Great Britain misinterpreted this gesture of good will has a chance in a million miracle and captured the whale, building their ship right on its back and carved open its brain to torture it in to moving. This led to the paradoxical situation in the ensuing years as the people began to realise they could not justify their survival off of the suffering of an innocent creature. But they believed if they released it, the creature would destroy the ship in its escape; so they devised the forget system to erase the memories and the Smilers and Winders to insure no one discovered the truth and to "Dispose" of those who didn't agree to have their memory erased. 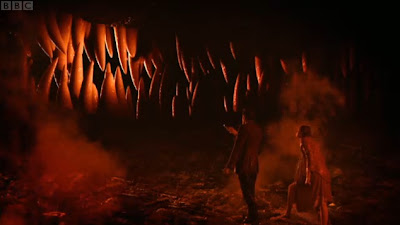 Eventually the Doctor discovered the heart of the ship where the Smilers and their controllers were torturing the Whale with electric shocks to keep it moving and faced the impossible situation. Angered that he would now have to sacrifice the life of an innocent and one of a kind being to save billions the Doctor was prepared to labotamise the Space Whale so it would no longer feel pain from the torture. Amy however noticed the Whale's neural tendrils affectionately playing with the children who the whale always refused to eat when they were sent down below. Remembering the Doctor's lesson about always observing she quickly put the pieces together and ran over to the control system to press the "Abdicate" button freeing the Whale. The ship however did not explode has was originally feared but instead started to move faster "Well now that the pilot's not being tortured" Amy explained have deduced that the Whale had come willingly and was still willing to help the people of Great Britain. (From The Beast Below, 2010) via
Posted by Joanne Casey at 07:00