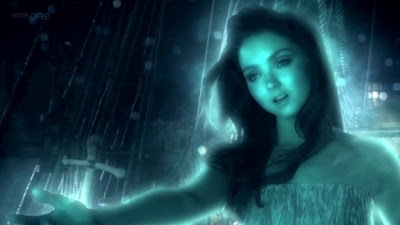 The Siren worked on an unnamed spaceship in another dimension. It accidentally became trapped in the same space as the Fancy, with any reflective surfaces acting as portals to the other dimension. The crew was wiped out by a disease from Earth, leaving her with no patients. With nothing to do, she became aware of The Fancy's presence, and sensed any crew member who was wounded in the slightest way (for example, a small cut). She then took tissue samples of the wounded sailor, leaving a black spot so she could then return and take the sailor to the sick bay to care for. However, even though she could keep her patients alive with life support she didn't know how to cure their ailments.

During a storm, she took the Captain's son, Toby. When Rory Williams was knocked off the ship and began to drown, the Doctor exposed a reflective surface so that she could save him. The Doctor, Amy Pond and Captain Avery all allowed themselves to be taken by the Siren to see where they would go. When they found Rory and the crew, Amy showed the Siren her wedding ring, and the Siren gave her consent to care for Rory. Captain Avery knew that his son couldn't be saved, so took over the space ship with his crew, allowing the Siren to care for them. (DW: The Curse of the Black Spot). via
Posted by Joanne Casey at 07:00

Email ThisBlogThis!Share to TwitterShare to FacebookShare to Pinterest
Labels: Siren