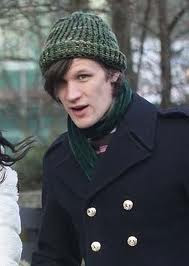 Matt Smith, the eleventh actor to play Doctor Who, says he would like to make some changes to his on-screen uniform.

With a girlfriend like Daisy Lowe, the model, Matt Smith has to pay heed to his personal wardrobe.He has now been thinking about a new look for Doctor Who. “I had some input initially with the bow tie and tweed,” he says of his on-screen uniform at a private view of the fashion label Acne’s collaboration with artist Daniel Silver in Mayfair.Although he feels he is “stuck” with the look he helped to create, he thinks it may be time for a spot of leather, too. “That would be good,” he says, thoughtfully.
...more
Posted by Gary at 07:00