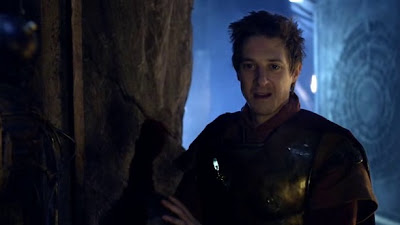 Rory Williams was an Auton based duplicate of the real Rory Williams who was killed in 21st century Earth at the hands of the Silurian, Restac.

Following that incident, an Alliance of races ranging from the Daleks to the Cybermen, Judoon, Sontarans and Nestene Consciousness along with a myriad of other races came to the conclusion that the Time Field forming was the end of the universe itself. They later pooled their resources in stopping it as they uncovered that the Doctor was going to be responsible for this event. To that end, they created an elaborate plan involving the Pandorica in Stonehenge that would serve as his prison. To complete the plan, the Nestene Consciousness was responsible for the deployment of Autons in the region where they were dressed up as Roman soldiers camped out near the area. This was based on the psychic residue left behind at Amy Pond's home which the Alliance managed to acquire as they believed it to be the perfect trap to ensare The Doctor and save the universe. The analysis of her home time period allowed for the creation of a duplicate version of Rory Williams in the process.

This duplicate was placed with the other Auton Roman soldiers where they were all led to believe that they were actual members of the Roman Empire. The Auton Rory Williams was led to believe that he had died and had somehow ended up in an earlier time period where he awaited the Doctor to rescue him. However, part of him believed that his early life was all a dream. When news came at the Roman encampment of strange visitors, Auton Rory decided to volunteer to help the Doctor fight armies of alien invaders that had come to claim the Pandorica when Professor River Song sought the Romans aid. Take a contingent of volunteer soldiers, they journeyed to beneath Stonehenge where Auton Rory saved the life of Amy Pond when she was being attacked by a Cyberman by destroying it with a sword plunged through its chest. Later, he explained his situation to the Doctor with neither knowing how Rory came to this time period. The Doctor managed to convince Auton Rory to meet Amy and confess his love since she had forgotten him due to his removal from the time line.

As he did so, she cried and began to remember him but at that point the Aliance struck where they captured the Doctor. The Nestene Consciousness had activated its signal that turned the Roman soldiers back to their Auton selves with the Auton version of Rory attempting to fight the program. He urged for Amy to run whilst attempting to assert his own personality over the programming. As he called out his name, Amy remembered and said that he was her boyfriend. Just as she hugged him, the Auton programming activated and the duplicate Rory's hand opened up into a blaster which shot Amy Pond seemingly killing her. (DW: The Pandorica Opens) via