The Whomobile was one of Jon Pertwee's personal vehicles. He retained possession of it until nearly the end of his life.

When Pertwee demonstrated the vehicle on an episode of Blue Peter during his tenure, he revealed that the vehicle was road worthy and legal, though he mentioned that the BBC forbade him or any of the crew from removing it from the studios except for outside shoots. It was capable of a top speed of 105 mph.

The vehicle was not created for Doctor Who, but was personally commissioned by Jon Pertwee, who retained possession of it after his stint as the Doctor. Pertwee gave it the name "Whomobile" during press interviews, but it was also known — again, offscreen — as "Alien". Had the vehicle been named in Doctor Who, it almost certainly would not have been called "the Whomobile", as this violated producer Barry Letts' strong conviction against making plays on the programme's title. The Doctor Who Technical Manual referred to it simply as "The Doctor's Car." 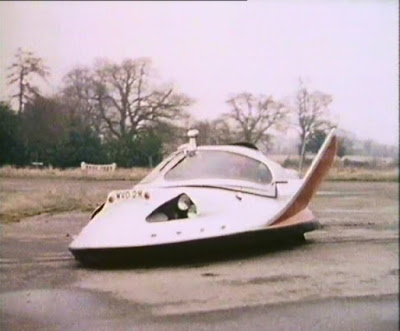 Email ThisBlogThis!Share to TwitterShare to FacebookShare to Pinterest
Labels: Whomobile