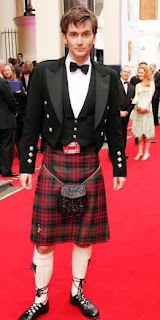 DAVID TENNANT is coming home to Scotland to star in a major new drama for BBC 1.
The Doctor Who heart throb will play a bereaved dad struggling to raise four kids in four-part drama Single Father.
Bosses at BBC Scotland are thrilled David has signed up for the role - his first big British project since his five-year reign as the Doctor ended.
He's just the latest big name to work at the Beeb's Glasgow HQ, after James Nesbitt, Kevin McKidd, Minnie Driver, Alex Kingston and ER hunk Goran Visjnic.
Bathgate-born Tennant, 38, said: "I feel very lucky to have been sent this script. I was desperate to be partof this project." ...more
Posted by Gary at 07:00

Email ThisBlogThis!Share to TwitterShare to FacebookShare to Pinterest
Labels: Scotland