Doctor Who Sale: Costumes Worn By Characters To Be Auctioned 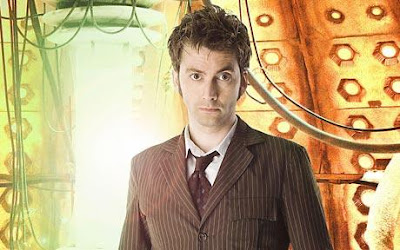 Props and costumes worn by the likes of Kylie Minogue, Billie Piper and David Tennant in Doctor Who are going under the hammer later this month.

Among the highlights are Minogue's waitress costume – complete with bloomers – worn when she played Astrid Perth in the 2007 special Voyage of the Damned. It is expected to fetch up to £3,000.

A jacket worn by Piper's character Rose Tyler is expected to raise up to £700 while a pair of the character's pyjamas and dressing gown could fetch £250.

Also under the hammer will be examples of Kroll squid, Mandrells, Nimons, Foamasis, Tractators, Mogarians and Vervoids and a Brontasaurus spanning the tenure of Jon Pertwee, Tom Baker, Peter Davison, Colin Baker and Sylvester McCoy at the helm of the Tardis.

The sale takes place at Bonhams in Knightsbridge on February 24. via
Posted by Joanne Casey at 18:15