Adherents of the Repeated Meme 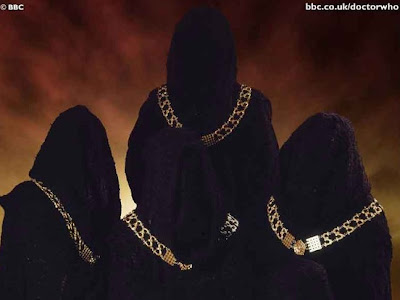 The Adherents of the Repeated Meme were a group of robots used by Cassandra O'Brien.

They look like large black cloaks with gold necklaces and a single metallic arm. These androids were used to carry the Metal spiders and to allay suspicion away from Cassandra at the end of the world party, where they supposedly represented the financial family seven.

Cassandra also had them trap Rose Tyler in a room with its sun filter descending as revenge for insulting her earlier. The Adherants were discovered and shut down by the Doctor when he ripped off one of their arms. (The End of the World) via
Posted by Joanne Casey at 07:00

Email ThisBlogThis!Share to TwitterShare to FacebookShare to Pinterest
Labels: Adherents of the Repeated Meme