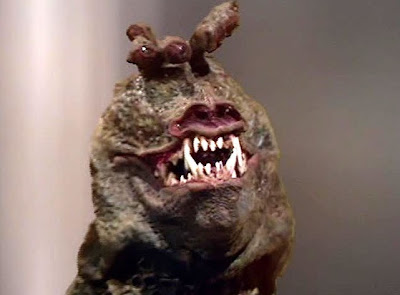 Drashigs are massive snake-like creatures with six eyes on stalks, fanged mouths, segmented bodies with greenish brown skin. They also have a sparse covering of hair. Their hide is strong enough to withstand machine gun fire. Especially large amounts of damage can kill them. They live in marshy areas. They are especially strong and can burst through metal structures.

Drashigs are unintelligent but they are social. They hunt in packs of three and live in colonies of 20. When hunting or in pain, they emit a chilling scream. Drashigs can and will eat anything including most metals. They hunt by scent and they will never give up the hunt once they find a trail. When they encounter the Doctor the Drashigs pass him by and follow his scent back to the cave he came in. (Carnival of Monsters, 1973)
Posted by Joanne Casey at 07:00

Email ThisBlogThis!Share to TwitterShare to FacebookShare to Pinterest
Labels: Drashigs