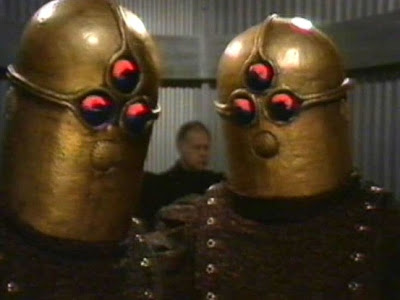 Seers were important members of the society that developed on the "P7E planet". They reported only to the Oracle, and were in authority over the Guards, who in turn were in charge of the "Trogs". They may have been androids or cyborgs. Like all beings on the "P7E planet" they were in some way descended from Minyans.

The two known Seers, Ankh and Lakh, interrogated Herrick and devised a plan to blow up the R1C by disguising bombs as what appeared to be the Minyan race banks. Later, when the "P7E planet" was destroyed, all Seers apparently perished along with the planet. (Underworld 1978) via
Posted by Joanne Casey at 07:00

Email ThisBlogThis!Share to TwitterShare to FacebookShare to Pinterest
Labels: Seers