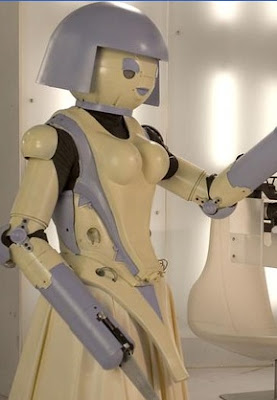 Zu-Zana was one of the robot hosts of the 200,100 version of What Not to Wear on the Game Station satellite, the other being Trine-E.

They were created by the Bad Wolf Corporation based on the 21st century hosts Susannah Constantine and Trinny Woodall. After attempting to find the right clothes for Captain Jack Harkness, they tried to remove his head. Unfortunately for them, Jack was armed with a Compact Laser Deluxe (hidden somewhere 'you don't wanna know', even though they had removed his clothing and, thus, any hidden pockets in the clothing with their defabricator) and blasted their own robotic heads off. (Bad Wolf 2005) via
Posted by Joanne Casey at 07:00

Email ThisBlogThis!Share to TwitterShare to FacebookShare to Pinterest
Labels: Zu-Zana