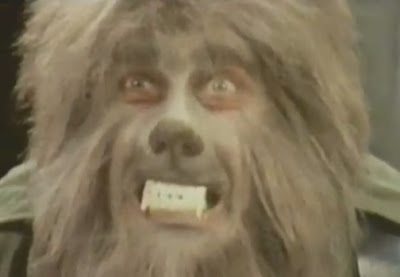 The infection could be spread by contact with the ooze. The transformation occurred in stages. They communicated only in a growl and their faces developed bestial qualities and teeth changed into fangs. Their skin turned green and they began to generate heat in a way impossible for a Human. Fully transformed creatures grew thick hair and partial hunchbacks. Banding together in groups, they instinctively sought to force Humans into physical contact with the ooze that they would themselves transform. They could survive great heat and even gunshots. They found cold temperatures, such as those generated by fire extinguishers, hurt them.

Primords were found both in the Doctor's universe and a parallel Earth. (From "Inferno" 1970) via

Email ThisBlogThis!Share to TwitterShare to FacebookShare to Pinterest
Labels: Primords