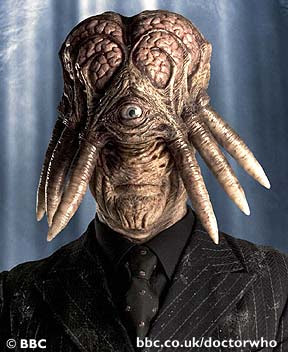 The Dalek Human race were created by the Cult of Skaro in New York in the year 1930. They were human bodies, with Dalek minds inside. The Daleks were relying on a gamma strike from the Sun to release the energy needed to splice the human and Dalek genomes together, and it was later revealed that the Empire State Building was constructed under the order of the Daleks by a human called Mr Diagoras, who was then merged with Dalek Sec, giving him a mind and a conscience. However, Dalek Sec, with the Doctor's help, wanted to change the process to give them emotions, as he believed that the creator of the Daleks, Davros, had been wrong all those years ago, when he determined that having no emotions made them stronger than their enemies. However, the rest of the Cult of Skaro - Daleks Thay, Jast and Caan, believed that he was no longer a Dalek. They turned on him, but the Doctor escaped, and held onto the spire of the Empire State Building as the gamma strike occurred, giving each of the Dalek Humans a potential for free will. Daleks Thay and Jast confronted the Doctor in an empty theatre. They tried to kill him, but Dalek Sec sacrificed himself to save the Doctor, losing his own life in the process. This potential for free will later asserted itself when they were ordered to open fire on the Doctor, and they turned on Daleks Thay and Jast, killing them both. Dalek Caan then deemed that the experiment was a failure, and put all of the Dalek Humans to death in an act of genocide.