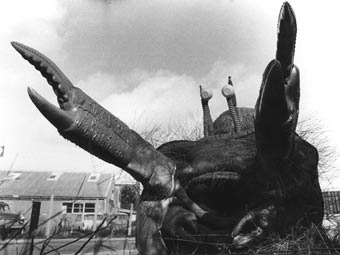 The Macra first appear in the 1967 Second Doctor story The Macra Terror by Ian Stuart Black. They are an intelligent, giant crab-like species from an unnamed planet colonised by humanity in the future. The Macra invade the control centre of the colony and seize the levers of power without the colonists — including their Pilot — knowing what had happened. Thereafter the Macra only appear at night, when the humans are in their quarters, observing a curfew. They have strong hypnotic powers which alter human perception. They also have the ability to ensure messages are vocalised through electronic apparatus such as television or sensor speakers. Both these tools are used to keep the human colonists under control, believing they are blissfully happy. This provides a cover for the Macra to use the colonists as miners in a vast gas mine. The gas is deadly to the miners but vital to the Macra, enabling them to move more quickly and rejuvenating their abilities. The Second Doctor effects a revolution on the Macra planet and helps engineer an explosion in the control centre, destroying the Macra in charge.

The Macra also feature in the 2007 episode "Gridlock", becoming the only one-off opponent of the Doctor in the classic series to appear in the revived series so far. (They are also the opponent whose consecutive appearances have been furthest apart, a record previously held by the Autons as of Rose.) In the episode, some Macra are found to be alive below New New York, a city of New Earth. They live in the thick fog of exhaust gases on the main motorway under the city, tracking the flying cars by their lights and snatching at them when they get too close. The Doctor says that the species is billions of years old and once developed a mighty empire as "the scourge of this galaxy", but the Macra beneath New New York must have devolved into nothing more than beasts. The status of the Macra beyond "Gridlock" is yet to be seen.