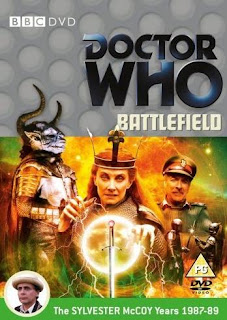 The final Classic Doctor Who release of the year has now been confirmed as the Sylvester McCoy-starring Battlefield. The four-parter sees the Seventh Doctor and companion Ace (Sophie Aldred) team up with the Brigadier (Nicholas Courtney) as they do battle with the forces of Arthurian legend who travel to modern day Britain to unleash the power of Excalibur for their own nefarious ends. Costarring ex-Mrs Jon Pertwee Jean Marsh as the sorceress Morgaine, this was the first story of Season Twenty-Six to air in 1989 and is the last from that season to arrive on DVD.
More info here
Posted by Gary at 08:15