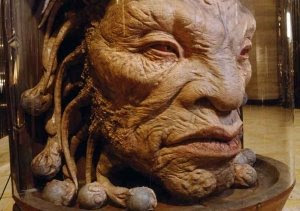 The Face of Boe is a fictional character in the British science fiction television series Doctor Who that appears to consist of a gigantic, human-like head, with, in place of hair, numerous tendrils, which terminate in round, pod-like structures. He is encased in a clear, sealed container and mounted on a movable pedestal base. The Face of Boe is a wholly mechanical effect, not portrayed on-screen by an actor, and is voiced by Struan Rodger. The Face merely grunted during his appearance in "The End of the World", communicated telepathically in "New Earth" and "Gridlock", and spoke for the first and last time in the latter. He is said to be billions of years old.

Email ThisBlogThis!Share to TwitterShare to FacebookShare to Pinterest
Labels: Face of Boe