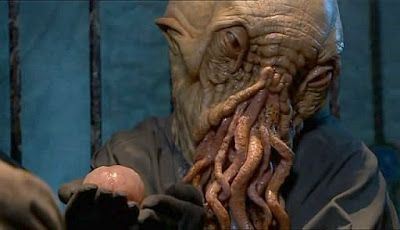 The Ood are a humanoid species with coleoid tentacles on the lower portions of their faces. In the distant future (circa 42nd century), the Ood are a slave race to humanity, performing menial tasks, and it is claimed that every human has an Ood servant. According to human characters in their first appearance, the Ood offer themselves for servitude willingly, having no goals of their own except to be given orders and to serve. It is also claimed that they cannot look after themselves, and if they do not receive orders, they pine away and die. However, mention is made of a group called the "Friends of the Ood" who are apparently lobbying for Ood freedom. Ood also have purple blood.

The Ood require a translator device, a small sphere connected to their "mouths" by a tube, to facilitate speech between them and humans. The tube was originally connecting their external brains to their body, but to use the creatures, far future humans would amputate the brain and instead fix the translator sphere where the brain used to be. There appears to be no gender differentiation among the Ood, and they say they require no names or titles as they are "one", but they do have designations such as "Ood 1 Alpha 1". The Ood are empaths, sharing among themselves a low-level telepathic communication field, rated at "Basic 5" (with "Basic 30" being the equivalent of screaming and "Basic 100" meaning brain death). When reaching out with their telepathic fields, it can be heard as singing. According to the Official Doctor Who Annual 2007 the Ood live on a planet in the Horsehead Nebula where they were governed by a Hive Mind but it was destroyed by Human colonists.

Email ThisBlogThis!Share to TwitterShare to FacebookShare to Pinterest
Labels: Ood