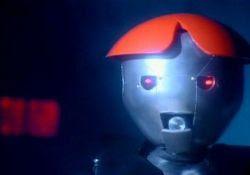 The Anne Droid was a robot who hosted a deadly version of the game show The Weakest Link in 200,100. Anne Droid's design and voiced was based on the original host, Anne Robinson. Anne Droid was equipped with a transmat beam in its mouth that it used to transfer losers to the Dalek Fleet.

The droid was used by the Bad Wolf Corporation aboard the Game Station in 200,100 and was only activated for the live shows of The Weakest Link, any other time always being shut off.

When the Daleks invaded the Game Station, Jack Harkness reprogrammed Anne Droid to fight the Daleks. She transmated three Daleks to an unknown location (possibly back to a Dalek ship), but before she could transmat a fourth, the Dalek blew her head off.
Posted by Joanne Casey at 07:00