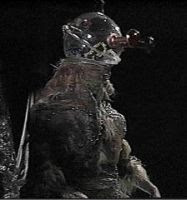 Morbius was a renegade Time Lord from the Doctor's birthplace, Gallifrey. He had been a member of the High Council of Time Lords, and attempted to move the Time Lords' policy towards the rest of the universe from observation to conquest. When the Time Lords rejected him, he formed an army of his own. He promised his followers the secrets of time travel and immortality. Morbius was eventually defeated and executed by his fellow Time Lords for his crimes. However, his brain survived. The remaining organ was taken away by the fanatical scientist Solon, who was planning the resurrection of Morbius.