The Sisters Of Plenitude 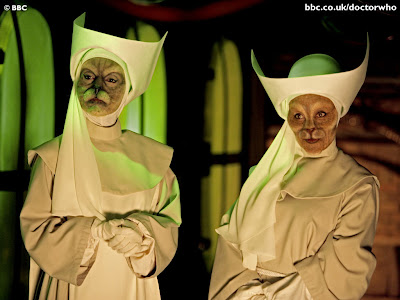 The Sisters of Plenitude were an order of Catkind nuns, devoted towards helping the sick (though they were ready to defend their lives with violence).

One group of the Sisters had a hospital named Pleasure Gardens on New Earth, nearby New New York. This hospital was created before the Humans got there and was created to deal with all their diseases. They had cures for nearly every known ailment and were able to heal their patients with remarkable efficiency. Many of the treatments shouldn't have been discovered for at least a thousand years, according to the Doctor.

Unfortunately, these amazing skills were gained by using thousands and thousands of grown Human clones. They were infected with every known disease and killed if they started to show signs of thought. This was due to the fact that other, more humane methods were too slow to deal with all the diseases. These disease carriers were released by Lady Cassandra and eventually cured by the Doctor. The Sisters were later arrested by the NNYPD for their actions.
Posted by Joanne Casey at 07:00

Email ThisBlogThis!Share to TwitterShare to FacebookShare to Pinterest
Labels: Sisters of plenitude