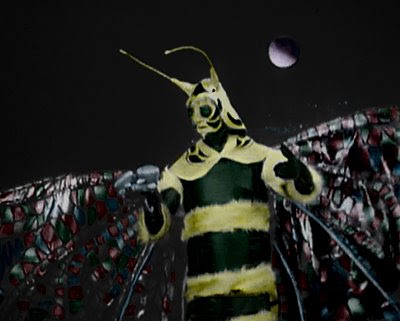 The Menoptra (originally spelled Menoptera) are an intelligent, bipedal insectoid species from the planet Vortis. In appearance, they resemble giant bees, with each Menoptra possessing four large wings. They have yellow and black stripes around their bodies and appear to be around six feet tall, but do not seem to have typical insect body parts (such as mandibles or an abdomen). They appeared in the First Doctor story The Web Planet, by Bill Strutton (1965). 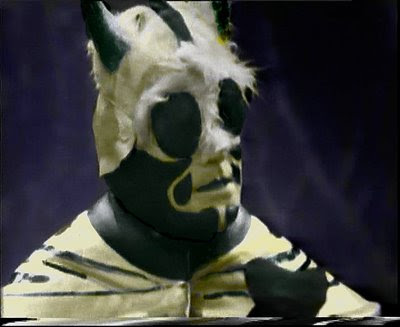 Peaceful and kindly by nature, the Menoptra move in a unique, stylised way and their vocal inflections are stilted. They were very welcoming of the First Doctor, Ian, Barbara, and Vicki; but showed an animosity towards their fellow insectoids, the Zarbi, as well as an abhorrence for the Animus, a hostile alien intelligence that had taken over the originally passive Zarbi and almost all of Vortis. Once it was clear that the Doctor was willing to help them defeat the Animus, they were only too glad to assist in any way they could.

The assumption is that once the Animus was defeated, the Menoptera, Zarbi and the rest of the inhabitants of Vortis were able to live together in peace.
Posted by Joanne Casey at 07:00

Email ThisBlogThis!Share to TwitterShare to FacebookShare to Pinterest
Labels: Menoptera