The Jagrafess, or, to give its full title, The Mighty Jagrafess of the Holy Hadrojassic Maxarodenfoe (AKA Max) was a gigantic, gelatinous creature similar to a slug in shape. Its exact origins are not known, but it was sentient and able to communicate in a series of growls and screeches. It had a life span of about 3000 years, with sharp, vicious teeth and several vestigial eyes. Its metabolic rate, however, meant that it had to be kept at low temperatures to survive. Its first and only appearance to date was in the episode "The Long Game". 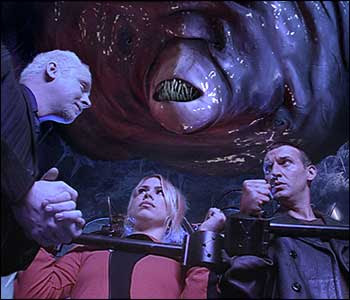 The Jagrafess was the supervisor of the mysterious and sinister Editor on board Satellite 5, a space station that broadcast news across the whole of the Fourth Great and Bountiful Human Empire of the year 200,000. The Editor (who called the Jagrafess "Max" for short) claimed that the Jagrafess had been placed with Satellite 5 some ninety years before by a consortium of interstellar banks. The intent was to use the news broadcasts to subtly manipulate the Empire, retarding its social, economic and technological growth and turning it more inward looking and xenophobic. Control was enhanced by the use of computer chips, installed in every human brain; chips that allowed the users to access the computer systems of the 2001st century, but at the same time allowed the Jagrafess and its cohorts to monitor people's thoughts. In this way, the human race was reduced to slavery without them even realising it.
Posted by Joanne Casey at 07:00

Email ThisBlogThis!Share to TwitterShare to FacebookShare to Pinterest
Labels: Jagrafess