The Quarks and The Dominators 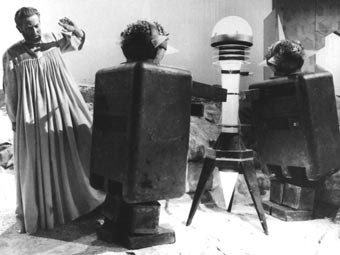 The Quarks were used on Dulkis by the Dominators to enslave and terrorise the indigenous Dulcian population to ensure the drilling of bore holes through the planet's crust. The Dominators planned to use their technology to fire seeds down the holes which would force the core to erupt, thus providing a new fuel source for their fleet.

The Quarks were rectangular in shape, with four arms: one pair which folded into the body, the other pair being retractable. On the end of each arm was a solitary claw. The legs extended out below the Quark body. The spherical head was visibly divided into octants; the upper four octants formed the sensory hemisphere, which detected changes in light, heat and motion. At five of the corners of the octants were directional crystal beam transmitters (the sixth corner joined with the robot's extremely short neck). Quarks communicated by means of high-pitched sound waves. Their major weakness was a tendency to run out of energy rather quickly.