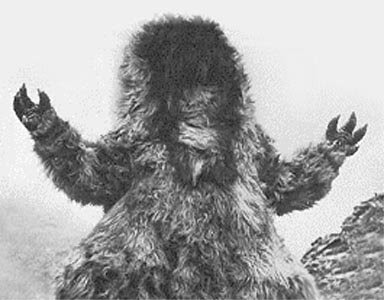 The Yeti of the British science fiction television series Doctor Who, although resembling the cryptozoological creatures also called the Yeti, are in actuality alien robots. Their external appearance, that of a huge hairy biped, disguises a small spherical mechanism that provides its motive power. The Yeti serve the Great Intelligence, a disembodied entity from another planet, which tried to form a physical body in order to conquer the Earth. The Yeti are initially a ruse to scare off curiosity seekers, and later form an army serving the Great Intelligence.

The Great Intelligence and its Yeti minions were thwarted twice by the Doctor's second incarnation, played by Patrick Troughton, in the serials The Abominable Snowmen and The Web of Fear. A Yeti was also one of the creatures in the Death Zone featured in The Five Doctors.

The sound effect of a Yeti's roar is created by slowing down the sound of a flushing toilet.