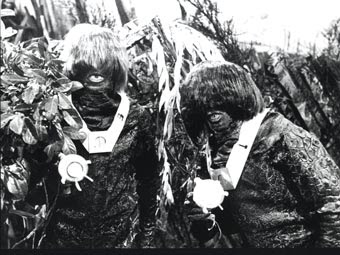 Monoids are a humanoid species that travelled on the Ark with the last of the Humans. The Monoids arrived on Earth long before the Ark went into space. Their own planet was dying and so offered their services in return for a place on the ark. The Monoids took over the Ark and formed a statue of a Monoid, intended it to be a Human, in which they place a bomb intended to destroy the ark after the Monoids have evacuated to the Arks destination, Refusis II.